Wireless networks based upon IEEE (Institute of Electrical and Electronic Engineers) 802.11 standard, have experienced an overwhelming success since its first versions, two decades ago. In practice, the data rates have been multiplied by 1000, providing smart, reliable, and fast RANs (Radio Access Networks).

Despite early intents, 802.11a was the first successful standard published in 1999. The proposed modulation was OFDM (Orthogonal Frequency Division Multiplexing), with 52 subcarriers for the PHY (Physical channel). It operated on 5 Ghz frequency band, and it was stated to achieve up to 54 Mbps. Nevertheless, its implementation was an enormous technological challenge, so the release was delayed several months, and gave time to a strong establishment of 802.11b.

On his part, 802.11b appeared the same year. It worked on the 2.4 Ghz band, but using spread spectrum techniques like DSSS (Direct-Sequence Spread Spectrum) to access the radio channel. It achieved a rate up to 11 Mbps and had a larger coverage area than 802.11a, but unfortunately it was subject to more interference. The reason was the shared spectrum with cordless phones, Bluetooth, microwave ovens, and many other technologies that operate within the same frequency band.

802.11g arrived in 2003, merging the best characteristics from both standards: it operated on the 2.4 Ghz band, but used OFDM modulation to access the radio channel, obtaining again up to 54 Mbps. It was backward compatible with previous technologies and promoted the settlement of WLAN (Wireless Local Area Network) technologies as a reliable and cheap substitute of Ethernet. Dual band a/b/g products fastly spreaded through the market, and accelerated in a notable manner the standardization of WiFi devices within the 802.11 framework.

Being WiFi the absolute king of local wireless communications, 802.11n was released in 2009. Also known as HT (High Throughput), it announced data rates up to 600 Mbps. To achieve this, it proposed for the first time the use of multiple transmission and reception antennas, which was known as MIMO (Multiple-Input, Multiple Output). It also allowed to aggregate legacy 20 Mhz channels in pairs (40 Mhz) under user request. This channel bonding policy was going to become a frequent improvement in the next releases of the standard. In addition, it proposed STBC (Space-Time Block Coding) and beamforming (which was not widely implemented due to technical difficulties) to improve robustness and coverage area of the radio signal. So much expectation was created that 802.11n compatible products arrived at the market even before the standardization process was completed. 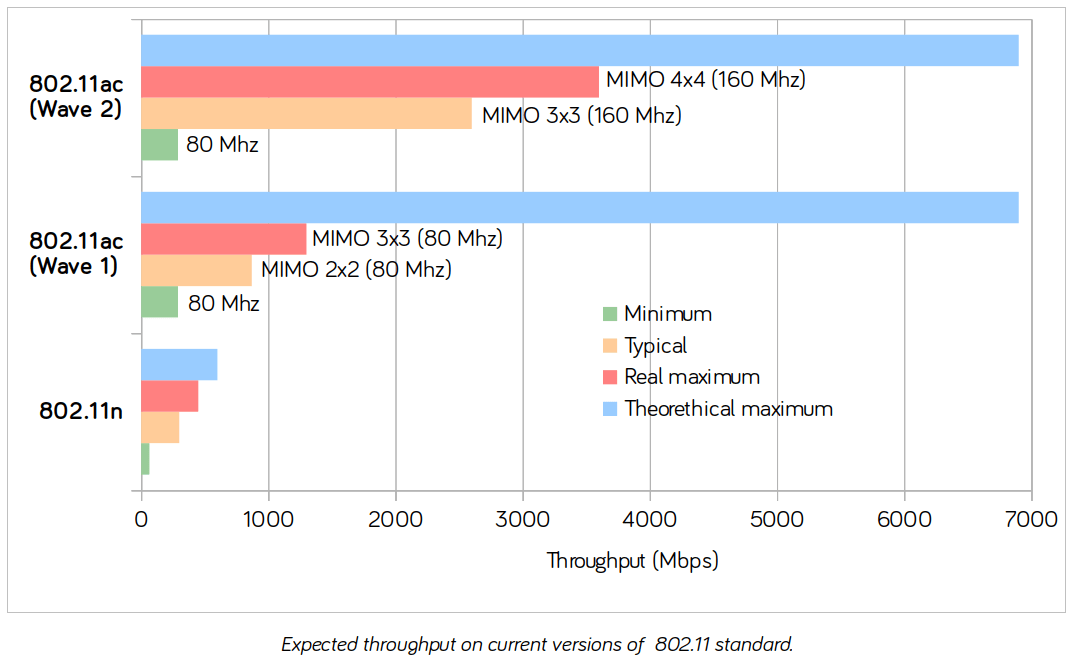 802.11ac is the latest version of the WiFi standard for WLANs. It was approved in 2013, and it defines how the standard shall implement VHT (Very High Throughput) networks, with the aim of achieving data rates of several Gigabits/sec. It operates exclusively on the 5 Ghz band, and it allows bonded channels of 80 and even 160 Mhz. In addition, it raises the modulation order in optimal conditions up to 256-QAM (Quadrature Amplitude Modulation). However, its biggest step forward is the extended use of MIMO, supporting up to 8 antennas transmitting and receiving, adaptive beamforming, as well as downlink MU-MIMO (MultiUser MIMO). Later in this document, we will review these technologies. Some of these improvements were a major engineering challenge, so the market release has been splitted into two phases: Wave 1 at the end of 2013 with the basic features (which are a substantial improvement over 802.11n), and Wave 2 with advanced features in 2016.

The biggest step forward is the extended use of MIMO, supporting up to 8 spatial streams, adaptive beamforming, as well as downlink MultiUser-MIMO.

As expected, the throughput rises substantially when introducing better modulations, larger channel bandwidth, and more transmitter/receiver antennas. On that, it shall be noted that this effective throughput is calculated for the better channel conditions, and for only one user. However, we can get closer to this upper bound when using the newest devices available.

AOIFES is boosting wireless performance in all possible WiFi scenarios thanks to CHT. Our APs are equipped with the latest 802.11ac Wave 2 technology, which together with the benefits of CHT will make your WiFi network perform better than ever, even in the most demanding situations.